We’re preparing to release Kubuntu 12.04 LTS, the Precise Pangolin, in April 2012. With this Beta pre-release, you can see where we are with our bug fixing and polishing of the official release. Read on for some feature highlights and information about known issues.

NOTE: This is an beta pre-release. Kubuntu Pre-releases are NOT recommended for:

Kubuntu Pre-releases ARE recommended for:

To upgrade to Kubuntu 12.04 LTS from an older release, follow the Upgrade Instructions.

Instructions for burning the image to a CD/DVD or USB flash drive can be found on the Burning ISO Howto.

We recommend you learn how to check your CD image so your pre-release is as it’s supposed to be. Compare your MD5 checksum with the correct ones found alongside the CD images.

Kubuntu Active is a new flavour from Ubuntu for tablets. It uses Plasma Active and the new UIs designed for tablets. It is currently avilable for i386 only as an image to put on USB keys. 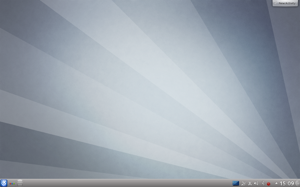 The latest stable release of KDE's Plasma Workspaces and Applications brings new features and improvements all around.

Instant Messaging has changed and so has our software with Telepathy KDE. You can easily set it up to talk on GTalk or Facebook as well as MSN and many other protocols.

Amarok has added an MP3 shop and integration with GPodder, an online personal podcast archive.

Webkit based browser Rekonq has been updated to make it faster and more stable.

The OwnCloud self-hosting cloud solution has also had a major upgrade in version3.

LTS is stable for the long term so we have concentrated on stability rather than new features in the default install.

The Muon Suite has been updated to version 1.3. The Muon Suite is now more robust and faster than ever. The Muon Update Manager has received a facelift, making keeping your computer up-to-date a snap.

Many GTK apps are now written with GTK 3. We have packaged the theme to neatly integrate with KDE's Oxygen.

From the Ubuntu Community

Read the Ubuntu 12.04 Beta 2 Technical Overview for the updates on kernel drivers, better backwards compatibility for 64-bit machines, and other improvements.

We want to hear your opinions on this beta.

Take a look at the Ubuntu Code of Conduct, try Kubuntu 12.04 Beta 2 and head on over to the Feedback Page. Your input is an invaluable resource, so do take the time to write down your thoughts and let us know what you think!